Words to follow before the end of January
Posted by Cape Tenaro Birder at 20:04 No comments:

Posted by Cape Tenaro Birder at 20:03 No comments:

As in the previous two years we chose as our ringing site a valley side and bottom just south-west of Paliros where abandoned olive groves provided shelter and a corridor of movement for migrant birds after their arrival on the Cape.   On the penultimate day we experimented with a single 6m net positioned over a permanent drinking pool in a steep sided gulley below the village of Koureli

On the day of arrival (2nd April) 6 nets were erected by late afternoon and the first 2 birds caught and ringed. By 07.30 on 3rd April, 8 nets were in operation and the session finished with 40 new birds being ringed.  From the 4th April onwards the full complement of 9 nets totalling 93m was in operation.


11 full sessions of ringing were completed with two days being lost to bad weather.  The average was about 35 birds per full session which compares very favourably with the previous years’ averages of 26 and 25 ringed per day.

It was interesting to see the different species composition of an earlier visit compared to the previous two years and also some marked daily differences, for example 3 Pied and 11 Collared Flycatcher caught on the 3rd April, followed by none caught the following day.

We reviewed the siting of our study area and concluded that it is the optimum site that can be operated by one ringer, whilst still having the potential to expand if we were to have a larger team involved with the ringing programme in future years.

The big advantage is that it is away from any habitation and is neither troubled by people nor domestic animals.  Its position in relation to migrants making landfall on Cape Tenaro and then moving generally north into the landscape also seems to be beneficial.

The targeting of the drinking pool near to Koureli could also prove to be an attractive option for the normally inactive afternoon/evening periods.

Posted by Cape Tenaro Birder at 20:01 No comments:

Words to follow
Posted by Cape Tenaro Birder at 20:00 No comments:

Today was the last day of full coverage, details to follow. The undoubted highlight was a Blue-cheeked Bee-eater. First seen flying towards the lighthouse along the ridge above Pipit Plateau it then returned north and headed towards Kokinoghia where it was relocated sat on wires. 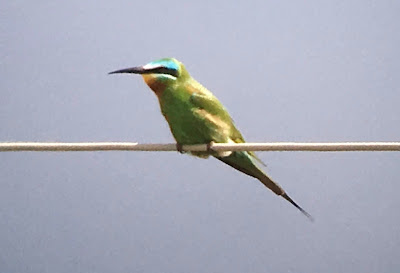 Posted by Cape Tenaro Birder at 00:17 No comments:

Posted by Cape Tenaro Birder at 23:22 No comments:

Summary - Friday 12th April
Run out of time for the blog, so will try and do later. Generally quiet for birds but a massive influx of Painted Ladies was very impressive.

Posted by Cape Tenaro Birder at 06:49 No comments:

An interesting arrival with a very marked increase in Nightingales (89) the highest day total we’ve yet recorded on the headland. One noticeable aspect of today’s fall was that it concentrated in the northern part of the headland, there were relatively few birds in Kokinoghia or along the route to the lighthouse.

The other main components of today’s fall were: Wryneck (11), Whitethroat (51) and Subalpine Warbler (43).

A Reed Warbler (ringed) was the first of the year, as were a party of Bee-eaters over Paliros.

Grounded Migrants: Full counts to follow, need to get back in the field !

Visible Passage: Two Tree Pipits were seen heading north at Beehive Pass early on, part of a small arrival of this species. At 13.00 the first Bee-eaters of the year flew north over Paliros.

Bird Ringing: Our best day's ringing yet, with sps, our best total so far. Nightingale (22), Subalpine Warbler (14), Whitethroat (13) were the top 3 species. Full figures to be added later.